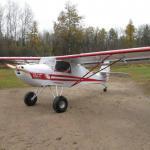 I need a Kitfox 4 wing rib

15 posts in this topic